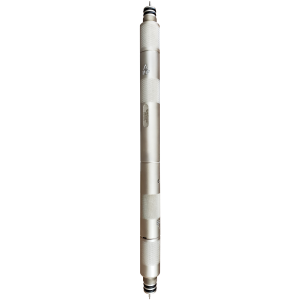 The 1 11/16” OD Addressable Disconnect Tool —Non-Ballistic (ADT-NB) is the next evolutionary step in ICSI’s family of Disconnect Tools that have been serving the wireline industry since 2014.

This Tool combines technology from several of ICSI’s latest innovations to make an impressively robust, non-ballistic alternative to other Disconnect Tools on the market.  No explosives are required, eliminating explosives safety issues, thermocycling concerns, and explosives compliance issues.  With no worry of degradation in a detonator,this tool is also an ideal choice for applications such as fiber opticmonitoring which require a tool string to remain in a well for days or weeks ata time with no circulation of fluid to mitigate high wellbore temperatures.The ADT-NB can be used with Control Fire Systems or with other addressable switch systems so long as the switch is not an integral part of a detonator.  The simple design of this Tool makes it possible for a field hand to change out the addressable switch in the tool in less than three minutes.  The Upper Housing of the Tool is removed to expose the built-in Switch Holder, the switch is changed out, and the Housing is threaded back onto the Tool to make up the rest of the electrical connections.  No extensive wiring is required of the field hand.

If a wireline operator is running an EB gun string or is not running any switch at all, a separate Switch Housing can be run on the Tool to allow it to be run with ICSI’s EB-Compatible Addressable Switch.  This Switch allows its user the safety of an addressable switch without having to purchase an expensive addressable perforating system.

When the decision is made to disconnect, an addressable code is sent to the switch installed in the ADT-NB. Current is then supplied to the Tool.  A mechanical release system is activated and a Hydrostatic Equalizing Plug is severed, equalizing pressure inside the Tool.  The Fishing Neck that is attached to the Fish is then released.  The ADT-NB is typically run below the CCL.  The top sub of this Tool is sealed so the wireline engineer will be able to see collars as he/she is POOH.

The ADT-NB can be lifted with any tool string that the CCL can be lifted with.  It needs no Shock Sub and can take any shock the CCL can handle.  The 1.688” Tool is pull rated to 20,000 lbs., with the weak point being at the Release Assembly.  However, when the Tool is in the well underhydrostatic pressure, the Release Assembly has no weight or compression on itdue to the design of the tool.